The Signs of a Failing Alternator 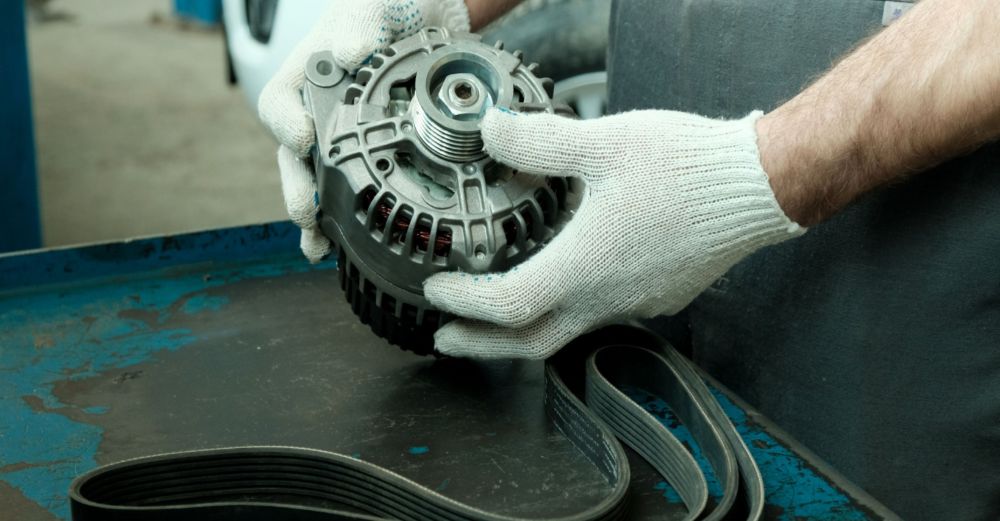 The alternator is what keeps the vehicle thriving while the engine is in drive mode or idle. It works as the primary electrical supply source for the vehicle. It contributes to the functionality of various parts, from the headlights to the radio. With this role, the battery and other electrical components rely on it, which can give it the potential to fail due to normal wear and tear. On top of normal wear and tear, there are many other causes of alternator failure that your vehicle will attempt to warn the driver. Below is an explanation of how an alternator works, signs of a failing alternator, and some common causes of failure.

How Does an Alternator Work?

A vehicle is made up of countless different parts that all work together to cater to the engine to run the vehicle. The alternator component powers most of the electrical parts of the vehicle while it runs or sits idle. The alternator is made of electrical power referred to as a Direct Current (DC) that supplies the headlights, electrical steering, windshield wipers, radio, and a few other functions with energy. An alternator turns mechanical energy into electricity, giving the drive belt power when an engine is running. The drive belt or serpentine belt shifts power to the engine and other parts such as the alternator. Using a pulley system and tensioner device, the serpentine belt constantly runs as the vehicle runs, and that rotational power motivates other parts to run. The serpentine belt leans on the pulley system while it turns the alternator's rotor shaft. The rotor shaft also transmits electrical power toward the engine. The rotor shaft spins the magnets that are in place to generate what is called an Alternating Current (AC). The alternating current sends currents to the alternator's rectifier component that converts the AC power into DC power. All this process is what makes a vehicle's electrical system function.

The alternator's role in a vehicle supplies many different parts with power; without it, it would be difficult for a vehicle to function at maximum capacity. Like any other component in a vehicle with a significant contribution to its success comes decline. Some of these declines may be due to time and use, while some causes of failure may be due to other elements.

Inconsistent voltage can be due to an alternator's failure to create enough energy to recharge the battery, negatively affecting the light system's functions.

There are chances that a battery in a vehicle dies due to wear and tear, but there are some cases where a dead battery can be due to the alternator not being able to fulfill its purpose. The alternator gives the battery power to consistently provide electricity to several parts of the vehicle. If it is unable to keep the battery charged, the battery will stop functioning altogether and will have to be replaced.

As stated before, the alternator provides the battery with power, but if its ability to provide power collapses, the functions that rely on the battery's energy will also begin to decline. For example, the windows in modern vehicles utilize electrical energy for functionality, which means it depends on the battery's power to go up and down.

There may be instances where specific parts like the spark plugs aren't getting enough power from the alternator and could be creating more significant issues that negatively affect the engine. When the spark plugs don't get enough power, it could stop the vehicle from running entirely.

Growling and whining noises can signal that the serpentine belts that turn the alternator's pulley are misaligned, or they may even be rubbing up against the side of the pulley to create unwarranted sounds. These sounds are proactive ways for a vehicle to communicate that something is not working correctly and can lead to destruction if not taken care of as soon as possible.

The smell of Burning Rubber or Wires

The drive belt of the alternator has a vital function. Over time, it can fail, and it will signal this failure through the smell of burning materials. A lot of tension and friction goes into supplying power to the alternator, and being that it is close to the engine, it can create thermal energy.

These signs are ways that a vehicle proactively communicates that something is wrong. Some of these signs can tie to more than one issue, but all contribute to failure. With these listed signs come causes. Some causes of loss can be due to normal wear and tear, and some can be because a corresponding part needs attention. Each sign can be rooted in something else.

The most common cause of a failing alternator is the regular use of a vehicle. These parts are designed to work together for a long time to supply the engine with power. Over time, parts have nothing to give anymore and must be replaced. Issues like heat damage, exposure to water, or frayed wires are due to other problems that will require repairs done by a professional.